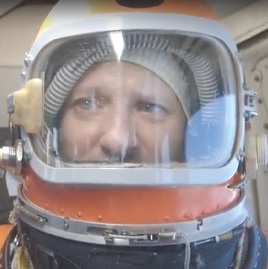 Dr. Smith is a cofounder of Pacific Spaceflight, a private think tank developing pressurized garments for human space exploration. A prehistorian at Portland State University’s Department of Anthropology, he has published widely on the human past (including two books on evolution), but also on the anthropology of the human future in space  settlement, most recently in Scientific American magazine and in his book Emigrating Beyond Earth: Human Adaptation and Space Colonization (Springer 2012) and Principles of Space Anthropology: Establishing a Science of Human Space Settlement (Springer, Fall 2019). He aims to advance human space exploration by developing new technologies and techniques. Dr. Smith has spoken for NASA managers and has consulted in the private space industry on life-support and space suit matters. In Winter 2014 he spoke at Canada’s Perimeter Institute for Theoretical Physics and TEDX Brussels, and in 2015 he presented space suit technology as a speaker at both TEDX Portland and the Oregon Institute of Technology; the technology was also demonstrated in 2018 at Arizona State University’s School of Earth and Space Exploration. Dr. Smith’s research on the genetics of space settlement and constructing an evolutionary, adaptive paradigm for space settlement have been published in the scholarly journal Acta Astronautica; he has also published innovative space technology in the Journal of the British Interplanetary Society. A diver, paraglider pilot and hot air balloon pilot, Dr. Smith is applying his many years of sailing, mountaineering and solo Arctic icecap expeditions to devising ways to explore the surface of Mars. The author of nearly ten books–including An Atlas of Human Prehistory (Cognella 2016) and The Fact of Evolution (Penguin Random House 2011)—he is currently completing Principles of Space Anthropology: Establishing a Science of Human Space Settlement  (Springer Fall 2019), a graduate-level technical foundation of a science of human space settlement.  Dr. Smith’s website is cameronmsmith.com, where links may be found to his many interviews and media profiles.

“I love his innovative spirit, attention to challenging details and his ‘can fly attitude” — Dr. Dava Newman, NASA Deputy Administrator and MIT Professor of Astronautics and Engineering Systems quoted at intel.com.

Never gets old for me! Apollo 14 landing. You can learn a lot about flying with a copilot from this and the other Apollo landing videos. https://youtu.be/oZZe-xXx9_o?t=847 Working on my team's Copilot manual.

Pressure indicator light installed in KG suit helmet (2nd photo), green blinking light comes on at 3.55psig, you see this in peripheral vision and are always reassured suit is at good pressure. All well!

Good press test today, 4 psi in the suit, leak rate of an Apollo-era lunar suit. Pressurized garments take odd shapes and postures when a person is not wearing them, as here where I have it just laying on the work table. All well!

Preflight burner test! This was the day of my private pilot 'check flight', which I passed :) Today my permanent certificate arrived, I may carry passengers in beautiful N56ZL, 'Skylab'!

My fuel tanks, Bonnie and Clyde :)

Yep it's a dinosaur -- but hey we got birds from dinosaurs :) I hope this one flies!

With my buddy Michael Rudis, at Diamond Craters, OR, last summer -- back there this Thanksgiving to test a new piece of Mars exploration gear and pressurized suit!